It falls in the month of Vaisakha, on Sukla Tritiya(Akshaya Trutiya), this auspicious day is observed as a country festival all over Orissa with the ceremonial sowing of the seeds for the next harvest and offerings to Lakshmi Devi or Anna Lakshmi. This day has great importance in the Temple of Jagannath in Puri, Odisha. Akshaya Tritiya is also known as the day when Ganga first descended to the Earth. 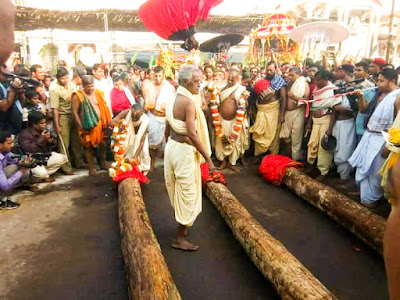 The three 12 feet logs of ‘soura katha’ have already been procured. They will be brought to the ‘Ratha Khala’ area near the Jagannath temple where the construction work of chariots will begin after getting the garland of permission or ‘aagyan mala’ from the deities of the temple followed by special rituals conducted by the temple priests
Akshaya Tritiya is also called as Akha Teej in North India. The day is believed to bring good luck, eternal prosperity, and success. Any activity, which commences on this day is regarded to be very auspicious and will grow exponentially. This day is so auspicious that any moment of the day can be considered to be beneficial for starting something new like a new business, house warming ceremony or any construction works etc.
Chiranjeevi Bhagwan Parsurama the 6th Avatar(incarnation) of Lord Vishnu as a bhramin warrior took birth on this day, and even sasthi devi took birth on this day, even on this the Treta yug commenced even on this day Ved Vyasa started the recital of the Mahabharata in presence of Lord Ganesha, even on this day of Akshaya Tritiya kuber assigned as the lord of wealth. so, according to all this, we must have got an idea about the auspiciousness of this day for the beginning of anything. 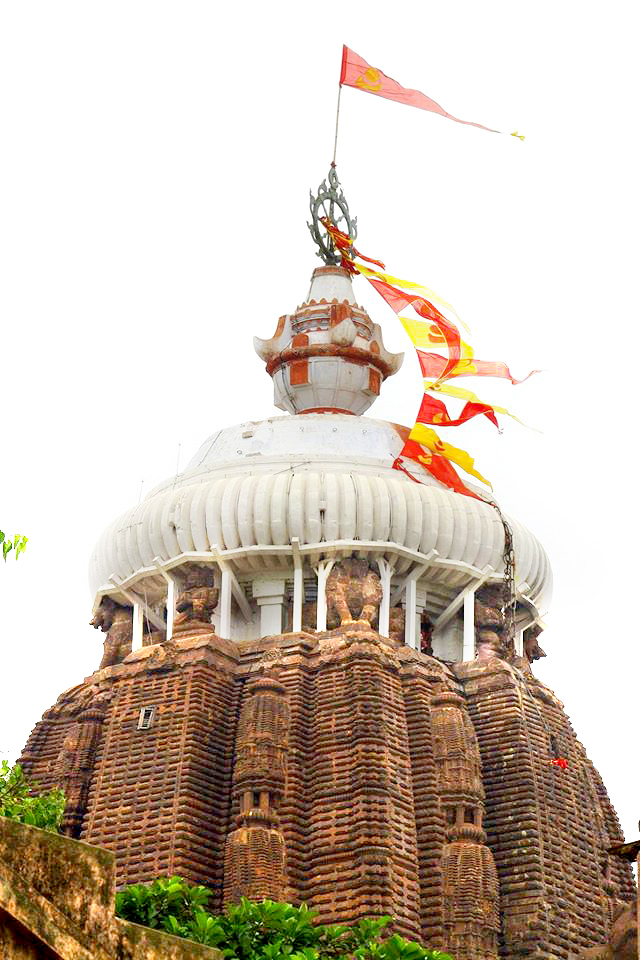 In Jagannatha Temple, Puri the longest festival, Chandan Yatra begins on this day as well as the construction of the holy chariots for the rath yatra also begin on this day. As Shri Jagannatha adi Chaturdha murty are showing Manabiya leela(humanly acts) here so due to the hot summer to get relief from the heat their sital upchar(remedies to prevent heat) are done from this day. In Sri Mandir on the previous night of Akshaya Tritiya Sandalwood paste are kept in silver container and are placed in Bhog Mandap hall,  on the next day(Akshaya Tritiya) after the morning puja(sakala dhoopa puja) ,bhoga mandap and Mahasnan rituals the silver containers are taken in procession along the Sri Mandir for three times with gongs, royal umbrella, trumpet and then placed on the sacred Ratnasinghasan, thereafter the Chandan Lagi (smearing of sandalwood paste) of the deities are done then the garlands of flowers and tulasi(basil) are offered to the deities. 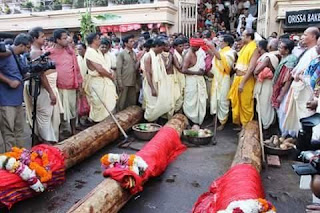 After the Madhyanna dhoopa puja (afternoon puja) Sri Madanmohan,Bhudevi Sridevi gets Aagyamala-garland of permission for Chandan yatra  at the same time 3 pujapandas gets 3 aagyamalas from the 3 deities for the the Ratha Anukula(chariots works to begin) and when Represtative deities comes out of the temple the Pujapandas holding aagyamala comes out and placed them the 3 logs with khandua pata(silken cloth of the deities) and the ratha anukula rituals begins by the bramins in the mean while the represntative deities Sri Madanmohan, Bhudevi, Sridevi, Rama Krushna and Panchamahadev remain there as if they are monitoring the Ratha Anukula Ritual after that they goes to the narendra sarovar for the rituals of Chandana Yatra 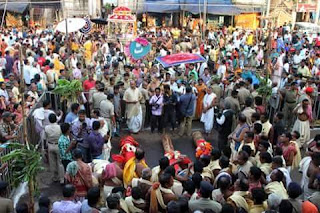