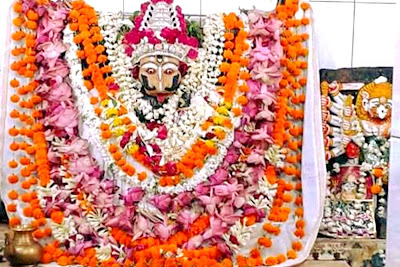 Ugram veeram mahavisnhu jwalantam sarvato-mukham Nrusingham bheesanam bhadram mrutyur mrutyu nama miham
The Presiding deity of Sri Khetra (Puri), Narasimha is popularly known as Narasingha and Nrusingha in Odisha.
Tradition in Puri says that even before the appearance of the supreme lord Jagannatha, Narasingha was residing in Nilachala beside Kalpa Bata as Adi Narasingha an unimagined form of Mahavishnu. The ista-deva for the asvamedha yagya ceremony organized by king Indradyumna was also Narasingha, as Yagya Narasingha. Narasingha is the first archa avatara of Vishnu. Amongst the dasa avatar, the first three avataras (Matsya, Kurma, Varaha) are nimitta avataras, which appear only for the specific purpose of executing a mission and immediately disappear. 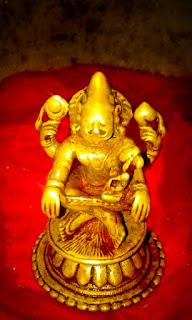 The incarnations of Vishnu are described in many scriptures, especially in the Bhagavata Purana, an
essential text of Vedic knowledge that is highly revered and recited daily in the Jagannatha Temple, Puri. This scripture describes Narasingha in the two groups of ten and twenty-four major avatars of the Lord. The main ten avatarara of Vishnu are also described in the famous Gita Govinda composed by Jayadeva, specifically in the dasa avatara stotra at its very beginning.
aadya murty bhagawata nrusingha akrutiroopa

The three main archa avatars in chronological order are Narasingha, Ramachand, a and Krishna, characterized by a specific adhara tattva, adheya tattva, and adhara shakti. Among the three archa avataras, Narasingha is the one who mostly resembles Jagannatha – for example, neither of them accepted parents in their appearance lila. Adhara is the “element”, adheya is the “purpose” and adhara-shakti is the “power” displayed by the avatara. For Narasingha, the adhara tattva was tejas (effulgence), that is wrathful (ugra) against the evildoers, combative (vira), radiant (jvalantam) as well as compassionate (bhadram) for His devotee. His adheya tattva was the protection of Prahlada symbolizing pure and innocent bhakti and the destruction of Hiranyakasipu symbolizing irrationalism, and the adhara shakti was omnipresence as elaborated in the dialogue between the great devotee Prahlada and his demoniac father Hiranyakasipu.God is omnipresent. He is all pervading and all-penetrating (sarvato mukham). His right eye is the Sun (Surya) and His left eye is the Moon (Chandra); His third eye is Fire (Agni).

The Narasingha mantra forms a very important aspect of the rituals of the Jagannatha temple, from their very beginning. "Singhajantra samaikakhya Indradyumna nivesayat " the Purushottama mahatmya of Skanda Purana says that after the ritual performed by Brahma, king Indradyumna perceived the Deities in the form of Narasingha. Brahma on making a singha yantra and asked  Indradyumna the king to sit inside it, initiated him in the Narasingha mantraraja (still used today). Indradyumna then had a vision of Yogi Narasimha (the benevolent form of Narasimha, as opposed to the Ugra Narasimha, the terrifying form), sitting inside a yantra formed by a lotus of 32 petals,
hands-on His knees, and Lakshmi Devi sitting on His lap. Narasimha looks at Lakshmi with a broad smile and is shaded by the 1,000 hoods of Sesa Naga on His back. Sesa is identified as Balabhadra (Sankarshana) and Lakshmi is identified as Subhadra (more on this subject later).
(To be continued) for more information visit https://www.divinechariots.com/
Tags:
Avatar dasavatara Narasimha narasingha The Presiding deity Narasimha vishnu
vishnu