Ram Navami is one of the important festival, celebrated in India. According to the Hindu calendar on the month of Chaitra Sukla Navami, the appearance day of Sri Ramachandra is celebrated with a great joy. As Sri Rama is the seventh incarnation of Lord Vishnu, so this festival of Ram Navami has great importance in the temple of Jagannath. 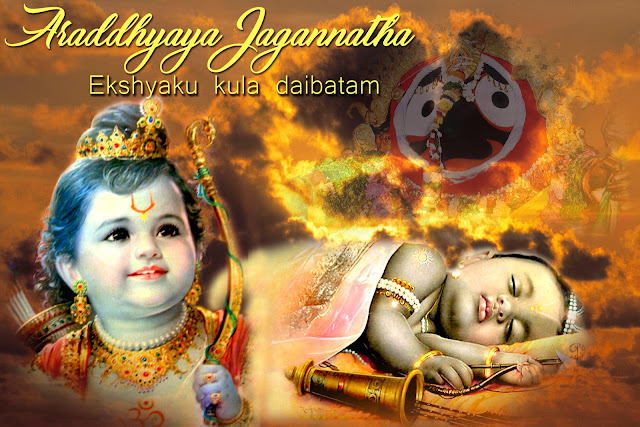 The above verse is from Valmiki Ramayan, where before going to leave his body Shri Rama advice Vhibhisan and hanuman to go and worship Jagannatha, who is the deity (kul devata) of Sri Rama's Ekshyaku clan, again the place where people and god stay together.

On the day of chaitra sukla sasthi(according ot the hindu calendar) after the sandhya dhoopa puja(evening worship of Lord Jagannatha), in Surya temple the idol of Sun god is given a ritualistic bath (mahasnan), dressed with new clothes and a special type of bhog is offered which includes pancakes, rice pudding and ladus, this food offering to sun god is done in panchaupchar puja ritual.

This festival is observed on Chaitra sukla Ashtami. After Sakala Dhupa, Bhandara Lokanatha is taken to Ishanesvara’s shrine, where He is given a special garland that was first offered to Ishanesvara. Then Lokanatha is then carried to the Jagannatha Vallabha Matha, where Bhoga vandapana and Ashoka Manohi (offering) take place before He returns to the temple. For the offering of Jeuda bhoga, after Sandhya Dhupa, Jeuda Bhoga is brought in and the Mudirasta does the Prasada Lagi. Then Bhoga Manohi(offering) is done with pancha upachara puja. Then the Panda, Pati mohapatra and Mudirasta does the vandapana at the three Badas. Vandapana is done for a longer period at Mahaprabhu Bada(of lord Jagannatha). 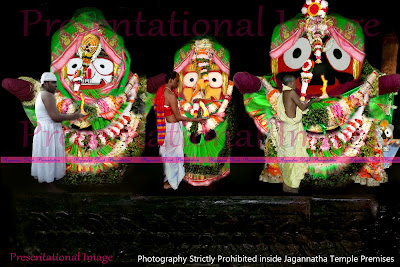 (Like this Vandapana is done and with some different rituals and aarti in it)
Note: Its a unique ritual in sri mandir where Lord Jagannatha gives birth to Sri Rama and on the day before the rama navami garbha udaka vandapana and jeuda bhoga is offered to reduce the labor pain that one got during the childbirth and as Lord here showing the humanly acts. so its a part of it.

Ram Navami(Rama Navami Yatra)
The Rama Janma celebration is observed on Chaitra sukla Navami. On this day after Madhyana dhoopa (the afternoon puja of deities), the Jaya Vijaya dwara(door) is closed. The Sudu Suara cleans the area in front of the Bhandara Ghara, then the Panda draws the Janma Mandal and Dakshina Ghara Bhoga are offered. Next, the Deity of Shri Rama (Raghunatha) is carried to the Ratnasinghasana, where the Mudirasta offers Dhandi Prasada. Raghunath receives the agyamala(a garland as a token of permisson from lord Jagannatha) and sits on the mandala. Two Mahajanas dressed as Dasharatha and Kaushalya and the birth rituals take place by covering the Deity with a Khandua(silken cloth).Then Karpura Arati and vandapana are offered and the Mahasuara offers Gandusa Masala and milk. The Dasa Samskara for Raghunatha is celebrated, up to the thread ceremony. Finally Sitala Bhoga is offered and the Mahasuaras offer Charu at the Jaya Vijaya Dwara. The Deities wear the dress called Rama raja bhesha. Earlier the Raghunatha bhesha used to be offered last it was held in 1905, with the Deities dressed as Rama, Sita, Laksmana, with bow and arrows, and figures of Hanuman and monkeys made of gold, and for 7 to 9 days, functions are held in various Sahis (streets of Puri), called Sahi yatra, with dramatic representations of Rama Lila.
Yagya Raksha 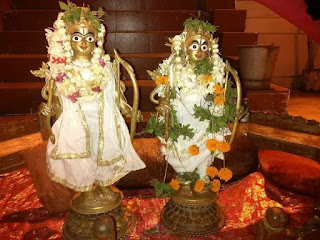 The celebrations for the birth of Sri Ramachandra are followed by the re-enactment of some of His most famous leelas(pastime). The festival of Yagya Raksha revisits the episode where Sri Rama and his younger brother Lakshmana went with Vishwamitra to protect the Yagya (sacred ceremony of fire sacrifice) that Vishvamitra was performing, and that had been disturbed by some demonic beings. The ceremony is observed on Chaitra Sukla Dasami. After Sandhya Dhoopa and Dakshina Ghara Bhoga, he Deities of Rama and Lakshmana are carried to the Ratnasinghasan where they receive the aagyamala, then they go in a procession to the Jagannatha Vallabha gardens. The people of Harachandi Sahi also come on a procession and perform the episode, and finally the deities return to the Dakshina Ghara inside Sri Mandira.
Sita Vivaha
The re-enactment of Sita’s marriages is held on Chaitra sukla Ekadasi. Three garlands are offered to the Sri Jews during Sandhya Arati. After Sandhya Dhoopa(evening puja) the Deities of Rama, Lakshmana and Sita are carried from the Dashina Ghara and after receiving the aagyamala the garlands as permission. They go to the Jagannatha Vallabha
gardens. Here people from Harachandi Sahi arrive on a Sahi Yatra procession, with one man dressed as Parashurama to re-enact the episode of the Ramayana when, after breaking the Shiva Dhanu in the Svayamvara of princess Sita, Sri Ramachandra is confronted by Parashurama who dares him to handle Vishnu’s bow. At that time, according to the Ramayana, Parashurama accepted  Sri Rama as no one else could set the arrow on Vishnu's Bow as Rama did, by knowing Rama as the incarnation of Lord Vishnu he Parshurama retired from that place. After this celebration the Deities return to the temple.
Vanavasa Kandarpa
The re-enactment of the period when Sri Rama, Sita and Lakshmana resided in the forest is observed on Chaitra sukla Dwadasi. Three aagyamala are offered to the Sri jews during Sandhya Arati. After Sandhya Dhoopa the Deities of Rama, Sita and Lakshmana are carried in from the Dashina Ghara and after receiving the aagyamala from the deities. They are carried to the Jagannatha Vallabha gardens. Here people from Markandeswara Sahi enact the Vanavasa Lila. Finally, Sitala Bhoga and vandapana are offered, and the Deities return to the Dakshina Ghara. After Chandana Lagi, a Kandarpa Patti (painting of Kamadeva) is worshiped. Mahasnana is done to this Pati and Bhoga vandapana is offered.
Damanaka or Dayana Chori
A beautiful pastime: Jagannath Mahaprabhu had forcibly collected Dayana leaves from the Nandana garden of Lord Indra and had worn them in his hands. This festival is observed in memory of the said incident.
This festival is observed on Chaitra sukla trayodasi. After Madhyana Dhoopa, Rama Krishna are carried in, receive the aagyamala and go to sit in the palanquin waiting for them near the Kalpa Bata, where the Kandarpa Patti (of which adhivasa was done the previous day) is already waiting. The palanquin is carried to the Jagannatha Vallabha gardens with the Kandarpa Patti kept in front. At the Jagannatha Vallabha gardens a Homa is performed, then Bhoga is arranged and after the Prasada Lagi the Panda does the pancha upachara puja for the Bhoga. Vandapana is done and Alata Chamara is offered.
The Najara (Mahanta) of the Jagannatha Vallabha Matha, accompanied by the Tadau Karana and the Deula Karana servitors, light a torch and visit the Dayana garden, 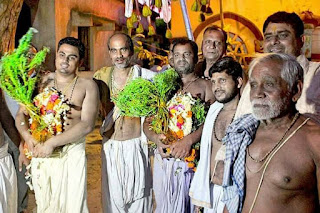 collect six small Dayana plants and settle them near the temple of Jagannatha Vallabha Mahavira, inside the gardens.
After the Bhoga offering, the Mahajanas quietly carry Rama Krishna inside the garden and steal 6 Dayana plants. Here, the Bhittarcha Mohapatra touches two plants to the Deities and brings the other four plants, covered with a Khandua, and places them in the palanquin. Then the Deities return to the Sri Mandira. Here, at the Bhoga Mandapa, a Chandua is tied while the Deities are returning to the Sri Mandira.
The Mahajanas remove the Dayana plants at the Garuda Dwara, then Bada Shringara Bhoga is offered. Madana Mohana, Sridevi, and Bhudevi receive the agyamala and are carried to the Bhoga Mandapa. Three Dayana plants are tied to the hands of Madana Mohana, Sridevi and Bhudevi, then they are placed in three silver bowls on a previously drawn Mandala. The bowls are covered with Chemedi Patani. Chandana and flowers are offered, then Sitala Bhoga is carried in and the Bhoga Mandapa is closed. The Lenka stands guard at the Bhoga Mandapa; finally, Vallabha Bada Shringara is offered and Pahuda Arati is done.
Damanaka Lagi and Maya Mruga

This festival is observed on Chaitra sukla Chaturdasi. After Sakala Dhupa, Mahasnana and Chandana Lagi are performed. New clothes are used to dress the Sri Jius. Then the Panda, Pati and Mudirasta go the Bhoga Mandapa. Three Pushpalakas hold the three silver bowls containing the Dayana plants. Madana Mohana, Sridevi, and Bhudevi circumambulate the temple three times and they are carried to the Ratnasinghasana. The six Dayana plants are offered at the three Badas (two to each). Then Madhyana Dhoopa bhog is brought in, Prasada Lagi is done and then Madhyana Dhoopa is offered with sodasha upachara ritual. After this, vandapana is done and the Dayana plants are removed from the Sri Anga and sent to the Sri Nahara. After Sandhya Dhoopa, Rama Lakshman receives the  aagyamala and are carried to the Jagannatha Vallabha gardens, where people from Kundehibenta Sahi enact the Maya Mriga Leela (the episode where the rakshasa Maricha takes the shape of a golden deer to distract Sri Rama so that Ravana could kidnap Sita more easily). Finally, the Deities return to the Sri Mandira.

On Chaitra Purnima, the devotees celebrate the enactment of this episode of Rama Leela, in which Hanuman raided Lanka and set fire to the city. After Sandhya Dhoopa, the Deities of Rama-Lakshmana receive the aagyamala and are carried in procession to the Jagannatha Vallabha gardens, where people from Dola Mandapa Sahi enact Lanka Podi (“burning of Lanka”); finally, the Deities return to the Sri Mandira.

Vaisakha krishna Pratipada celebrates the enactment of this episode of Rama-Leela, in which Sri Ramachandra and His army of Vanaras built the floating bridge to Lanka (Rama Setu). After Sandhya Dhoopa, Rama and Lakshmana receive the aagyamala and are carried in procession to the Jagannatha Vallabha garden, where people from Bali Sahi re-enact Setu Bandha Lila, after which the Deities return to the Sri Mandira.

The enactment of this episode of Rama-Lila, in which the demoniac king Ravana is defeated and killed, is celebrated on Vaisakha krishna Dwitiya. After Sandhya Dhoopa, one man from Bali Sahi is dressed as Ravana and stands near the Jagamohana Kotha. After receiving the aagyamala he visits various Sahis. After
Sandhya Dhoopa, Rama Lakshmana receive the aagyamala and are carried to the Jagannatha Vallabha garden, where people from Bali Sahi re-enact the killing of Ravana. Finally, the Deities return to the Sri Mandira.

The celebration of the coronation of Sri Rama as King of Ayodhya falls under the constellation of Pushya Nakshatra. This ceremony celebrates the episode in which Bharata and Satrughna, the two brothers of Sri Ramachandra who stayed back in Ayodhya to take care of the kingdom while Sri Rama traveled in exile, welcomed Sri Rama to his rightful place as the King of Ayodhya. During the entire period of Rama’s exile, Bharata and Satrughna had never claimed the throne for themselves, but had installed Sri Rama’s
shoes on the throne, and presented themselves merely as His servants and representatives. By presenting Sri Rama with his shoes, Bharata and Satrughna were re-uniting the symbol of kinship with the person of the King. 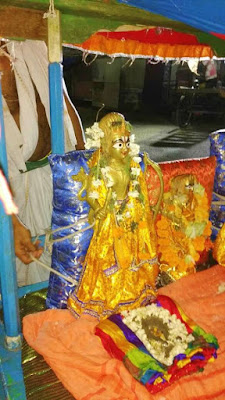 On this day, Lord Jagannatha celebrates his Tara Suddhi (purification or propitiation of the birth star). After Sandhya Arati and Dakshina Ghara Bhoga the Deities of Rama, Lakshmana, Sita, and Hanuman are carried to the Ratnasinghasana and after receiving the aagyamala They are quietly carried to the Jagannatha Vallabha gardens. Here, two men from Gaudabada Sahi dress as Bharata and Shatrughna and arrive after receiving the Paduka (Sri Rama’s shoes as a symbol of their service to Him) from the temple Bhandara.
Mahasnana is offered to Rama, Lakshmana, Sita and Hanuman.