Chaitra Navaratri is celebrated from the hindu month of Chaitra from Chaitra krishna pakhysh pratipada till Rama navami the birth day of Lord Rama, In this time nine forms of Mahadevi Durga is worshiped. 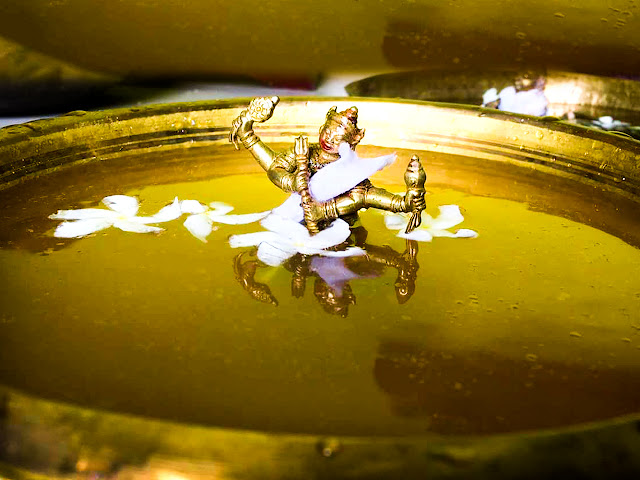 सृष्टिभूता  महाशक्ति  मणिपुर  निवासिनी  विमला  सा  पराशक्ति  उड्डीयना  पुरेश्वरी
अंजुना  देहि  में  देवी  बहिर्योगे  मामम्बिके  माधवः  भैरव  साक्षात्  प्रणतोस्मि  जगत्पते
Shakti is the Mother of the Universe, worshiped with many names. Basically as Maha Laxmi,
Maha Sarsaswati and Maha Kali. Mahadevi Durga(Bimala) is worshiped as per Chandi Path or Devi Mahatmya (from Markandeya Purana) which is also known as Durga Saptashati. Which is the most powerful text as the glories of the Mother Goddess who slays the demons Madhu and Kaitabha, Mahishasura,Raktabija, Sumbha and Nisumbha, Dhumraksha, Chanda and Munda, symbolizing the destruction of the various obstacles on the path of self-realization.
Many holy places (called Shakti pithas) were created when the different parts of Her body fell on the
Earth. The most famous is Kamakshya pitha in Assam, where Sati’s yoni fell; every year for three days the river flowing near the temple becomes dark red as menstrual blood, Another famous Shakti pitha is Dakshina Kali in Kolkata (Calcutta), that was originally called Kali ghata, here the small toe of Her left feet fell. In Viraja kshetra (Jajpur, in Orissa), Sati’s navel fell, and finally the last portion of Sati’s body (the feet) were placed in Puri by Shiva and became Bimala Peetha, Sri Pada Peetheswari Mahadevi Maa Bimala is the most powerful among all the shakti peeths.
When the best among the seers, the personification of Lord Shiva, Jagatguru Adi Sankaracharya visited Puri to worship Lord Jagannath, Lord Balabhadra, Devi Subhadra and Shri Sudarshan, he first prayed to the adi shakti of Sri khetra to the Bimala, and later on establishing the  first cardinal vedic institution on Puri as the Goverdhan peeth he assigned his most favourite disciples Padmapada acharya for this peeth and worshiped goddess Bimala as the devi of Goverdhan peeth.
Although great goddess has many forms apart from three basic as Mahalaxmi, Maha Saraswati and Maha Kali but we should never consider them different as even Adi Sankara never considered these three goddess as different.

This is the most powerful Kanakadhara Stotram of Mahalakshmi Devi by Adi Sankaracharya, which on being recited please Mahalaxmi devi.

One day, Adi Shankaracharya when he was a young boy, he was begging for alms and he stepped into the house of a very poor Brahmin lady to beg. The lady was disappointed because as in her house there was nothing good to eat. After searching for some time, she found one Amla fruit. And even she was hungry still she without any delaying immediately offered it to Sankara. After accepting the Amla Fruit he smiled and moved after seeing the plight of the woman, and just after moving a little distance he sang 21 hymns praising Goddess Maha Lakshmi. The Goddess was so well pleased that she appeared before him and asked him why he has recalled her. He asked the Goddess Maha Laxmi Devi to grant riches to the poor lady. The Goddess first rejected to do so because that lady had not done any charity or work for goodness in her previous birth and as it is not feasible to change one's fate. Then Adi Shankarachaya told the Goddess that she is the one who is capable of changing once's fate written by Bhramha ji and so, pleased Mahalaxmi Devi hailed the house of the poor women with the amla made up of gold.