Sri Jagannath 04:56 5
Service to Supreme God: Jagannatha
Sri Jagannatha is regarded as the supreme god and the sovereign monarch of the Odishan empire. The entire ritual pattern of Jagannatha Mahaprabhu has been conceived by Jagatguru Shri Adi Shankara keeping such twin aspects in view. The ritual system of the temple is very elaborate and complex involving a multitude of functionaries above one thousand spread over one hundred and thirty-six categories. The rituals of Jagannatha Mahaprabhu can broadly be divided into three parts - the daily rituals, the occasional(special rituals) and the festive rituals. 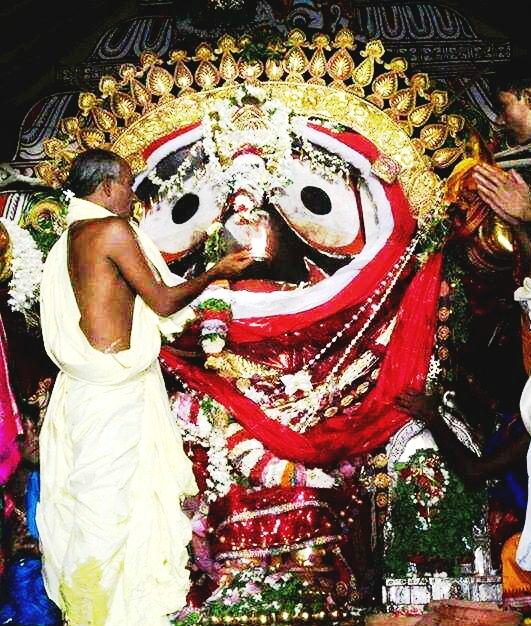 The fixed Rituals(niti) that are observed daily as of routine. The periodical nitis are observed on the occurrence of some specific occasions like Ekadasi, Sankranti, Amabasya, on eclipses and Nakshatras etc. Lastly, there are various festivals observed throughout the year some outside the temple like the Snana Yatra, the Ratha Yatra, the Chandana Yatra etc. and some inside the temple like Jhulan Yatra or swinging ceremony etc. Each (servitor)sevaka has his specified duty to perform in this nitis having terms and times specified. Unless a particular niti is performed, the next one cannot take place and consequently, punctuality sometimes fluctuates to ensure attendance of various categories of Servitors required for a particular Niti.
The word 'Niti' in Sanskrit means a principle, a rule or policy. But this word is used in the Puri temple in a more general sense, signifying a particular religious rite performed in the temple.
The rituals of the temple may be classified into three types:
(a) the daily Nitis, which are fixed and are observed every day as of routine course.
(b) the special Nitis according to the specialty of certain days, months etc. or some mishaps in the temple.
(c) the various festivals observed during the year. 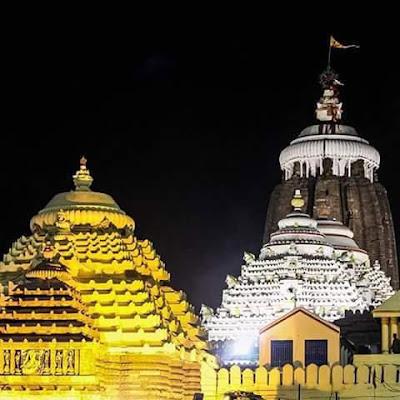 The various Rituals(Niti), that are observed daily in the temple commence at about 5 A.M. in general and continue until midnight. They include in seriatim the Dwara phita, Mukha pakhala(washing off face), Mangala Alati immediately after the doors of the temple are opened and an inspection made, Mailama (taking off the clothes and flowers of the previous night), Tadapalagi (putting on towels), Abakasa (cleaning of teeth and bathing) and this time Garuda snan is done and then Bhesha of the deities (dressing with new sets of clothes, flowers, and ornaments). Then a public darsana called Sahana Mela is held, when the people are allowed to proceed near the Ratnasinghasan (jeweled throne), have a closer view of the deities and circumambulate. After the Sahana Mela, the deities again change their dress. In the meantime, Rosa Homa(fire sacrifice) is performed in the sacred kitchen and the fire is used in all the hearths for cooking the food for the holy deities. Then followed by Surya Puja and the Dwarapala Puja, or the worship of the sun-god and the guardian deities Jaya and Vijaya, after which the Gopala Vallabha Bhoga is offered. Next comes Sakala Dhoopa(only kotha bhoga), followed by Bhoga Mandapa Bhoga and the Madhyahna Dhoopa(only kotha bhoga), as mentioned earlier. The deities change dress at each meal time and after each meal betelnut(Bidia Pana) are offered. After the meals, the deities enjoy a siesta, called Pahuda of the afternoon. In the evening an Arati is performed to mark the beginning of the nocturnal functions. The next Niti is Sandhya Dhoopa(only kotha bhoga). Devotees are again offered an opportunity of Sahana Mela in the evening hours. Then the deities change their dress, besmeared sandal-wood paste wear its called Chandan Lagi niti, special silken clothes, fresh flowers, and ornaments, and enjoy music and dance performed by specified Sevakas. This dress goes by the name Khandua patta and the bhesha is called Badasingara bhesa and the light food offered on this occasion is known as Badasingara Bhoga(only kotha bhoga). Green coconuts are then offered and detailed arrangements are made for the sacred slumber of the deities (Pahuda), after which the light is put off and the door is closed and sealed. But many more Nitis are performed on special occasions, For example, the Ekadasi Nitis are observed when a sebak of the temple services scales to the top of the temple (about 214 feet high) after nightfall and burns a lamp there amidst the loud cheers of thousands of spectators. On every Thursday, goddess Lakshmi(Sridevi), Bhudevi and Sri Madanmohan are washed, dressed and decorated carefully its called Majana Niti. On new-moon days the Amabasya Narayana(moving idol of Jagannatha) visit the holy ocean Mahodadhi as Varuna, the sea god said to be the father of Mahalakshmi Devi.
This apart, some purificatory or consecratory rites are performed when either a dog enters into the temple premises or a dead body is discovered somewhere in the temple premises. Spilling of blood, sputum, vomit, urine etc. call for the purificatory rites. Special Nitis are also performed on eclipse days too.
Tags:
Adi Shankaracharya Featured Jagannath Lord Jagannath Madanmohan Mahalakshmi Devi Mahaprabhu odisha Ratha Yatra rituals Service to Supreme God special sri mandir Surya Puja vishnu
vishnu