Nepal King a Servitor of Lord Jagannath in Puri 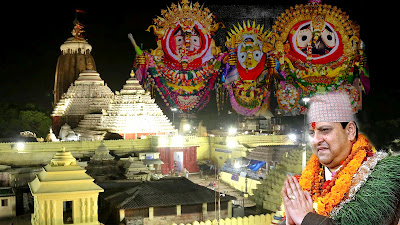 He has the special privilege to perform rituals atop Ratnasinghasan(bejwelled platform) the throne of the deities inside the sanctum sanctorum.Even the Puri's King Gajapati Maharaja lack the seva to perform rituals atop Ratnasinghasan.
Schedule of Rituals for Nepal king Gyanendra Bir Bikram Shah Dev's visit : Dwar Phita Niti opening of doors to be done by 3 am (IST),from Mangal aarti to Madhyanna dhoopa and 2nd bhoga mandap to be completed by 9:30 am(IST), by 10 am normal public darshan will be stopped and from 11 am to 12 am Nepal King Gyanendra Bir Bikram Shah Dev will perform the rituals inside the Garbha gruha and atop Ratnasinghasan.
All Time are according to IST(Indian Standard Time) 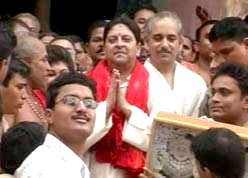 (An old photo of Gyanendra Bir Bikram Shah Dev,King of Nepal and Shri Gajapati Maharaja Dibyasingha deb,King of Puri, after having and performing the rituals of Mahaprabhu Shri Jagannatha,Lord Balabhadra and Devi Subhadra and Chakraraj Shri Sudarshan.)

Gyanendra Bir Bikram Shah Dev will visit Odisha on 7th Feb,2018 on arrival on February 7,he will inaugurate the Mission Cow Goshala at Rathipur near Jatni and Govandana, a unique ritual of offering homage to cows.Then on February 8 morning, the Nepal king will offer prayers at the Lingaraj Temple in Bhubaneswar and visit Sakhigopal Temple in Puri in the afternoon. Then on February 9 and 10, the king will be at Gobardhan matha marking the beginning of year-long spiritual program to commemorate the silver jubilee of the pattabhisheka of Jagadguru Shankaracharya of Puri.
Tags:
Gyanendra Bir Bikram Shah Dev King of Nepal will be visiting Odisha Lord Jagannath Nepal King Nepal King a Servitor of Lord Jagannatha in Puri odisha puri Puri Jagannath special privilege
special privilege