Like Sakala Dhoopa, this puja is also performed with Shodasha Upachar in the afternoon. The Bhoga items are more in number than that of Morning Dhoopa. After Madhyanha Dhoopa maximum Festive bhesas and festive rituals are performed.After the Bhoga Mandapa is over, the Pratihari ties the tera again and the Suara Badu pours water to wash the floor at the place where the previous offering had taken place. The Paniapata cleans up all the puja articles and hands it over to the Suara Badu. The Suara Badu washes the articles once again and arranges the articles in front of the four Deities.After the Bhoga is offered and the tera is opened, Arati is peformed.Then the Bojhia carry the Bhoga from the Pokharia to the Anand Bazar. 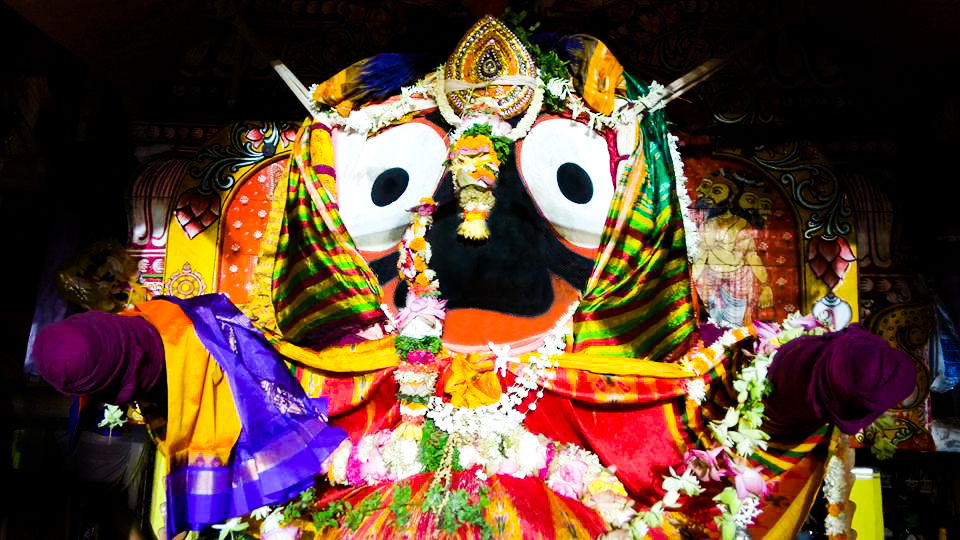 (Note : If rituals have been performed in time and if time permits, the Deities retire for the afternoon nap, generally it's not done because of the complex rituals but in the month of Kartika the Madhyana pahuda is mandatory and its done for 1-3 hours, the Suara Badu cleans the entire Pokharia(floor of the Garbh-griha).Then the Palia Khuntia calls for the Pushpalakas to do the Mailama(changing the dress of the deities). The Changada Mekapa arranges the Khandua (silk sari), Siri Kapada (scarf), and the flower garlands, and the Pushpalakas offer them to the Deities. Then the Khata Seja Mekap arrange beds. The Pushpalakas climb down the Ratna Singhasana, Arati is done, the Jaya Vijaya Dwara is closed and the Akhanda Mekapa extinguishes the lamps. The Bada dwara Pratihari calls outthe Lords as “Manima” and invites them to sleep to their respective beds and finally closes the Kalahata dwara and likewise the doors are sealed and again at the time of opening Vhittarcha Mohapatra examines the seal and then orders to break it and open the doors and again pratihari shouts Manima Please get up from the Ratna palanka and please be seated on the ratnasinghasan,After the Khataseja Mekapa brings the beds out, the Kalahata Dwara is completely opened  the floor is being cleaned and the rituals continues.) 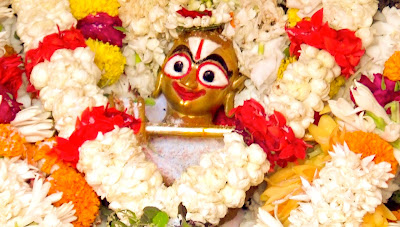 After the Madhyana Dhoopa, the bhoga  is offered to the Utsava vigrahas(Representative deities of Lord Jagannatha,on different occasions for the festive rituals these deities goes out of the temple for the rituals to be conducted outside Sri Mandir,and even for the festive rituals inside the temple,that's why they are also called Chalanti Pratima of Lord Jagannatha ) in the Dakshina Ghara such as Sri Madanmohan, Rama Krushna, Dolagovinda, Narayan, Badi Nrusingha,Raghunandan, Laxman, sita, hanuman, Madhusudan all in total they are 27 idols. 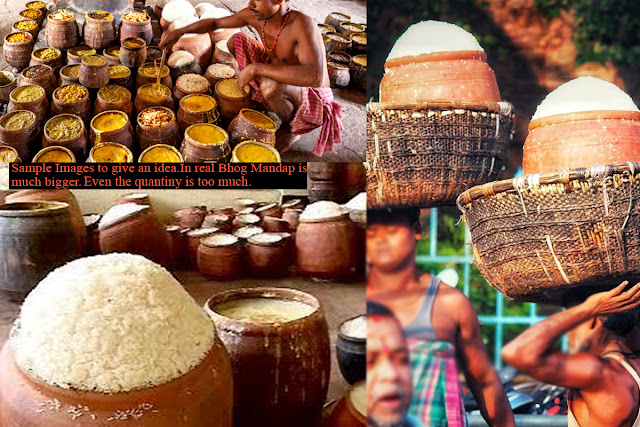 Like the first bhoga mandap the second bhoga mandap bhoga is done in the bhoga mandap hall, the bhogs are kept in the hall and 3 pujapanda seats at the entrance facing the lords the bhitar katha and bahara katha are put down and people are asked to move to both side keeping the middle space vacant and the pujapanda’s starts the puja of offering it to the deities in pancha upchar. Unlike any other places the food offering are done near the gods and the goddess but here even the food offerings which are being offered from a distance of around 350 feets are also being mahaprashad its because of the presence of Bhramah the alive Supersoul inside the wooden deities of Puri,a unique smell comes out from bhog the after being offered to the deities,that's what it then became Mahaprashad, making it more delicious.Even its one more living example of the alive lord Balabhadra, Devi Subhadra and Lord Jaganantha.
Tags:
Daily Rituals highlight Puri Jagannath rituals Rituals of Jagannatha Temple Slider
Slider