Sri Jagannath 04:30 2
Rituals of Jagannatha Temple: Mangal Aarti
Mangala Aarti
After the opening of the doors, As the part of Bhitara Sodha Garbha Gruha(sanctum sanctorum) is purified using sacred water.Before that the Akhanda mekapa(a servitor who is in charge of lighting ghee lamps) rush to light the ghee lamps inside there, the Khata Seja Mekap removes the Ratna palanka (3 bejeweled beds) along with the Palankadhari. The night offering (coconut, scented water, and Tambula) is also removed. All this while, bhajans in praise of the Lord are sung such as Jagannatha stuti, Ahe Nila Saila(the song of bhakta salabega dedicated towards the lord) etc, accompanied by dhols and cymbals, As maintaining all the purification and sanctity of all rush, the preparation of the first Aarti and the most important ritual of the day, the Mangala Arti are made. 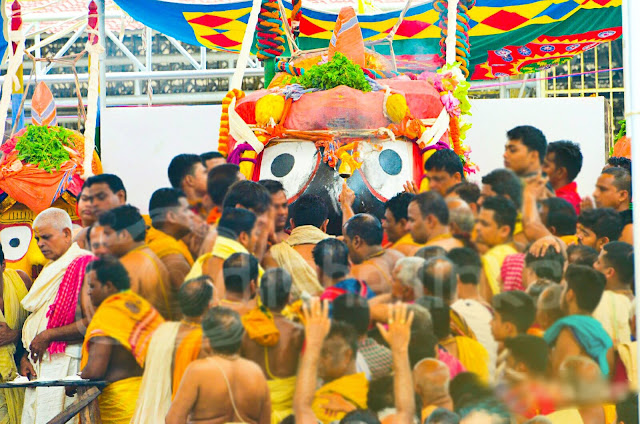 Vhitarccha Mohapatra stands down the Ratnasinghasan in front of Lord Jagannatha to perform the Mangala Aarti of their Lordship, in Sri Mandir this Aarti is known as Mangala Aalati, he stands before Lord Jagannatha and one Palia Pushpalakas each stands before Lord Balabhadra and Devi Subhadra each.Down the Ratnasinghasan, After washing their hands with the water given by the Garabadu's, these three Sevayats perform the Mangala Arati, first with  camphor lamps, then with 21 ghee wicks, then with Pithau Bati (the lamp made with rice dough and cotton wicks) each time they show the lamp to the deities they have to wash their hands and again move to the next Arati, After the Arati is completed, the rice dough lamp and camphor residues are distributed as prasadam. Only the Vhitarccha Mohapatra is supposed to do the Arati of Lord Jagannatha.The Mangala-alati is being done for the well being of the deities and in fact, their well being is the well being of the universe. During the time of the Arti being conducted, Jaya Jagadisha hare is being sung in the Jagamohan by the bada chata matha and the general public. 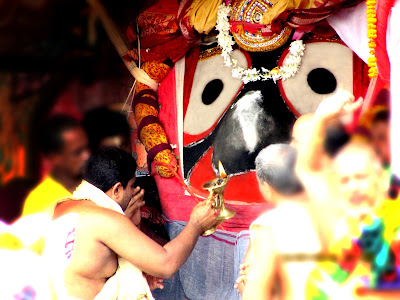 On some days, on account of extra rituals or delay in completion of rituals, it becomes impossible)to do pahuda (closing of the temple doors after the final niti is over in the night). On such occasions, the question of opening of the doors on the following morning does not arise and only from 'Mangalalati' onwards, the rituals commence.General timing for the Mangala Aarti is between 4:00 am to 5:00 am, sometimes on some special occasions due to the complex rituals when the temple doors are opened by 12:00 AM then the Mangala aarti is to be done by 01:00 AM, In this rituals the deities are on same dress of Badasinghara Bhesha in which they took rest last night. 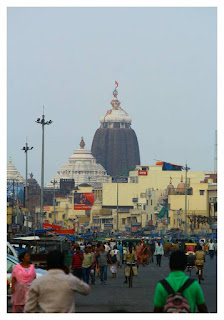 During the time of Anabasra for the 15 days before Rath yatra when the deities are being served secretly by the Pati Mohapatra's and Daitas, at that time Aarti of Patidiyan Thakura are done in the same way.On the day of Nabajouban Darshan(one day before Rath Yatra), Vhitarchha Mohapatra does the aarti of Lord Jagannatha in the presence of Datia and Patis after that only people get the darshan of the deities for the first time after a gap of 15 days.On Jestha Purnima this Aarti is done on Snan Mandap after the Pahandi Vije of the deities.When the deities are on Chariots this Aarti is done there atop the Chariots.
Tags:
Daily Rituals Jagannath jagannath mahaprabhu Mangal Aarti recent rituals Rituals of Jagannatha Temple Slider
Slider