Mailama, this means removal or taking off the clothes, dress, flowers, Tulasi etc. of the previous night. The Bhitarcha Mohapatra leaves after Mangala Arati. The three Pushpalakas, Khuntia , Changada Mekapa and the Dhoba enter inside. 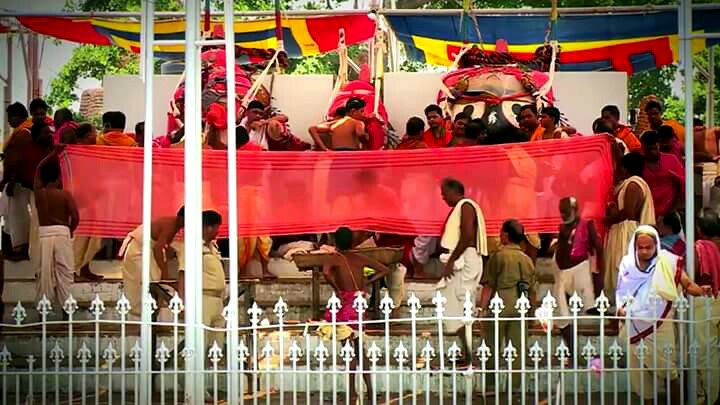 The Pushpalakas climb onto the Ratna Singhasan and touch the body of the Deities after paying obeisances to them. Then they remove the night silken dress of the Deities (bada sringara bhesha) and the Changada Mekap gives the clothes to the Dhoba Sevaka (who is actually a brahmana), who will wash the clothes of the deities.The old flower ornaments are also removed and divided. After sending the adharamala (the neck garland) of Balabhadra, Jagannatha and Subhadra respectively to the shrines to Maa Bimala, Maa Mahalakshmi and Maa Bhubaneswari, and the nakuasi, the nakha chana and the guna (different types of nose ornaments), some of the adhara, the small padaka decorating the head, of Jagannatha Mahaprabhu goes to the king’s palace carried by the Mudirasta and are delivered to the queen.Hrudaya padaka a big round flower ornament on chest,kara pallava on hands, all are distributed to the Khuntias and to the Pushpalakas who will sell them to devotees.Even one special occasion and festivals it's given to other gods and goddess around the temple and outside the temple to please the gods and goddess.While the night dress is removed, one Khuntia stands with a khandua pata (a silk sari) or a long cotton cloth on the day of Snan Purnima, to hide the holy bodies of the Deities. 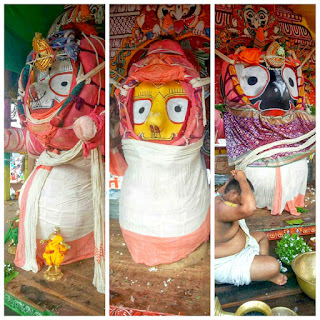 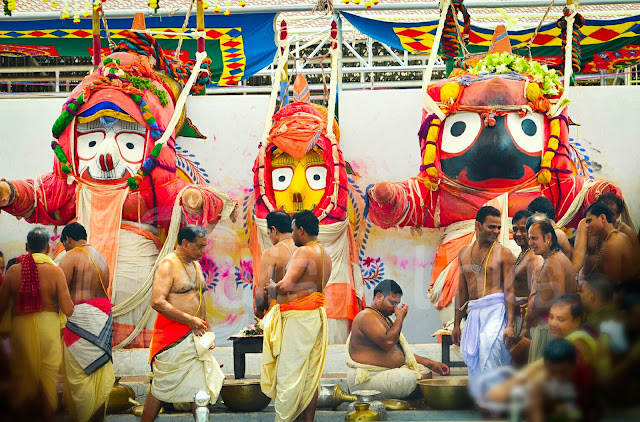 Usually, the ritual brushing and bathing ceremony for the Deities is called Abakasha, The Garbha gruha(sanctum sanctorum) is cleaned by the Suar Badu servitor with water provided by the Paniapata, then the Suar Badu places three wooden planks before the three main Deities and the Khatuli Sevaka places three khatulis (wooden thrones) for the Deities. The Mukhapahkala Pratihari arranges three plates with the items required for the Deities’ bath: flowers and Tulasi, water, amla, sandalwood paste, camphor, panchamrita, along with three brushes, tongue scrapers and twigs that are used as toothbrushes (muturi dantakathi sticks). The Darpania places the three mirrors near the plates; three pots of water are brought in along with a separate pot of water mixed with camphor. The curd (yogurt) provided by the Mahabhoi is added to the bathing water. They symbolically brush the Deities’ teeth and scrape their tongues. Then the water mixed with camphor, curd, amla, and Chandana is poured over the mirrors reflecting the form of the Deities. This is known as Bimba Snana. 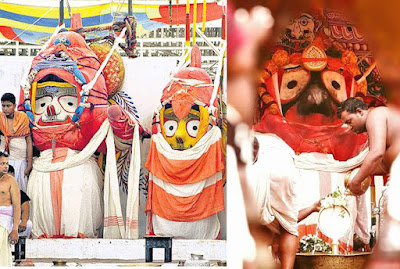 At this time the temple astrologer called Jyotisha Khuri Nayaka servitor reads the almanac and the forecast for the day.when the birth nakshatra (constellations) of the deities falls on a particular day the worship such as Nakshatra Vandapana are conducted after the Madhyana Dhoopa, with the cooperation of the Tadau Karana. After the bathing of the Deities is completed, the Garuda Sevaka (Palia Chunara) gets the water (the water from the Deities’ bath) and gives the ritual bath to Garuda with honey, yogurt,camphor,Chandan.

(Note: There are 3 types of Bathing of the Deities as mentioned here Abakasha and Bathing physically on the day of their Bathing Ritual, apart from that if any misshapen occur then the deities are given Mahasnan, it's also called as Maghasnan, where as its further divided into two types sana mahasnan and Bada Mahasnan) 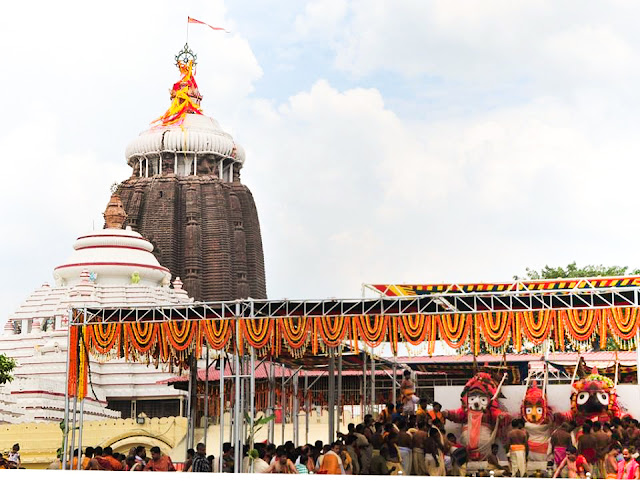